Home › Faith › Lenten Reflections – Those Who Betrayed Him

Lenten Reflections – Those Who Betrayed Him

This Lenten devotion is from 1958. To learn more about the history behind it, click here. 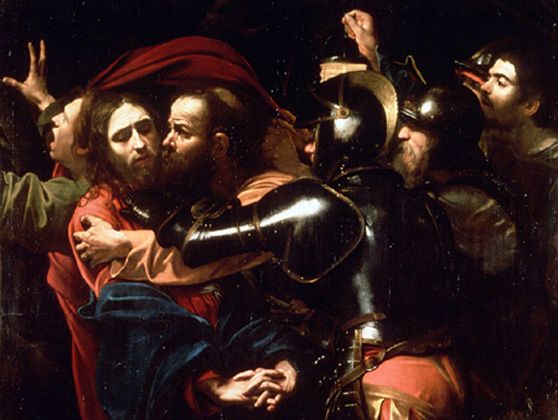 The Taking of Christ / Caravaggio

While he was still speaking, Judas came, one of the twelve, and with him a great crowd with swords and clubs, from the chief priests and the elders of the people. Now the betrayer had given them a sign, saying, “The one I shall kiss is the man; seize him.” And he came up to Jesus at once and said, “Hail, Master!” And he kissed him. Jesus said to him, “Friend, why are you here?” Then they came up and laid hands on Jesus and seized him. — Matthew 26:47-50 (RSV)

Dear friends, our topic tonight is, Were you there when he was betrayed? Let us see who was there.

Judas was there. Judas was one of the twelve men chosen by the Lord to be His disciples. Jesus loved him as He loved the others. In fact, Judas held a special office in the group. He was treasurer, but the Bible says that he was a thief. Greed finally led him to betray his Lord for the small amount of 30 pieces of silver, the price people had to pay for a slave. All the good Judas may have done in his days are forgotten. He is only remembered by one single act, the betrayal of the Lord.

The question has often been asked, how could Judas do this? Different answers have been given. Some say that he was a mistaken hero, that he wanted to help the Lord secure an earthly crown. Others say he was a devil incarnate. But we believe that Judas was a man, not a monster. He was just as human as you and I.

Judas was not always a traitor. He was not born with the guilt of treachery. When his mother looked into the eyes of her baby, her schoolboy or teenager, she did not see any treachery there. He was not a traitor in the early days of his fellowship with Jesus. When Jesus sent them out by twos to preach in the villages, he did not say to Judas, “You stay home; you are a devil, you cannot go out with the others.” Judas became a traitor but he was not so from the beginning.

We may even assume that at one time he was a loyal friend of the Lord. How the two met for the first time we do not know. Maybe the Lord preached somewhere and Judas stood and listened with many others, then followed Him to the next place and heard Him again. Judas was deeply convinced and asked to talk to Jesus. We are not told how they met. But one day they stood face to face and looked in each other’s eyes. When the Lord laid down His conditions, saying, “If any man will come after me, let him deny himself,” Judas forsook his business to become a disciple. Jesus accepted his offer and made him a disciple. He did not do this because He needed a traitor, but because He saw in this man possibilities.

I say we may assume that at one time Judas was a loyal friend and follower. His fellow disciples also seemed to trust him. Even at their last meal, when the Lord said, “One of you shall betray me,” the other disciples did not turn to Judas and say, “You are the man.” They had no reason to suspect him.

How then did Judas become a traitor? Although no full explanation is possible, of one thing we may be sure: there was a moment when this disciple began to turn away from Christ. At one point in time he took a false step and started to travel in the wrong direction. At the time it seemed only a small matter, but the end was tragic. The direction we are traveling in is important. It is the most important thing in life for each of us. If we are facing in the right direction there is no telling how Christ-like we may become. But if we are facing in the wrong direction — even so slightly — there is no telling to what depth we may descend. Judas started to move in the wrong direction.

As to how he took those first false steps, we cannot be sure. Was it resentment? It could well have been. Resentment, when it is unchecked, grows ever more bitter as days and weeks pass by. Maybe Judas had hoped that the Lord would establish an earthly kingdom. All the disciples cherished such hopes, but when the people wanted to crown Jesus king after the feeding of the thousands, He withdrew into the wilderness. Later He made his triumphal entry into the holy city. The time seemed ripe to proclaim Himself ruler, but instead of doing that, He wept over the city.

Judas was disappointed and full of resentment, thinking, “There’s no chance for personal advancement following a man like this. He has all the possibilities in the world, but he keeps turning them down.” Maybe Judas wanted to pull out and take what little he could with him. So he started to steal from the common purse. Maybe he told himself that he would give the money back some day, after he had reestablished his business.

We can be sure Judas felt very uncomfortable in the presence of the Lord. The kind eyes of the Lord looked at him and saw the dark spot in his heart. Resentment grew into hatred. He went over to the enemies of the Lord and said, “What will you give me if I deliver Him to you?” He took 30 pieces of silver, the price of a slave, and led them to the place where Jesus prayed. Then he betrayed Him with a kiss.

Judah was there when Jesus was betrayed. But let us forget for a moment who was there and consider what was there — what was in the hearts and minds of those that helped bring the Lord to the cross?

There was greed and covetousness. Today we call it materialism, that is, undue regard for money or things of this world. We give Christ second place in our lives. He is a kind of back seat driver; He may tell us what to do, but we have the wheel and go where we want. The world with all its lusts has first place. How often have you come to terms with the world at the expense of Christ? If that is case, then you were there when Christ was betrayed.

What else was there? There was envy and jealousy. We all know this green monster. Have you been envious and jealous? Have you begrudged someone? If so, you were there in the garden when Christ was betrayed. Whatever hurts one of His children hurts Him too. Those blind and jealous leaders helped Judas. So did the crowd, and all those who followed the crowd. Remember, before following the crowd, you should know where the crowd is going.

What else was there? There was fear. They all forsook Him and fled. How often have we done this? Instead of saying a word or showing our colors, we stayed quiet or walked away. One of the gospels gives us an account of the betrayal. It mentions a certain young man who followed Jesus. When the soldiers tried to arrest him, he fled, leaving his garments clutched in their hands. The young man is not identified. Why, I do not know, but I wonder if his name has been left blank so that each of us might see ourselves in him, and write our own name in his place.

Yes, in one way or another we have been there. We cannot feel smug when we read the story of His passion. We were there. We are joined to the betrayers. We cannot wash our hands and say, “I am innocent of the blood of this righteous man.”

He has borne our griefs and carried our sorrows. He was wounded for our transgressions, and bruised for our iniquities. By His stripes we are healed. All we like sheep have gone astray, we have turned every one to his own way, but the Lord has laid on Him the iniquities of us all. — Isaiah 53:4-6 (RSV)

With these words the prophet joins the whole world and the human race to the suffering of Christ. Christ substituted for us. A substitute is one who takes the place of another. Christ took my place on the cross; He took your place. He died in our stead. By faith we now can claim victory over greed and covetousness, over envy and jealousy, over whatever else brought him to the cross. All these evils, together with our old Adam, are crucified with Christ. Yet victory can only be obtained through Him, not by our own strength. Paul says, “Thanks be to God, who gives us the victory through our Lord Jesus Christ” (1 Cor. 15:57). We are His, and because we are His we want to be as He is; He who has prepared a place for us. The One who says, “Where I am, you shall be also.”